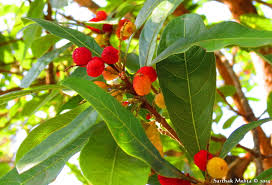 Kafal, a highly loved fruit found among the wide range of flora and fauna of Uttarakhand, the land of God. This fruit is considered the specialty of this state, which even draws the attention of the entire world towards it. Kafal, a popular fruit of Uttarakhand, is one such fruit that compels people around the globe to visit this state. Also known as bayberry or berry box, kafal is the state fruit of Uttarakhand and is consumed extensively by the people in the hills. Kafal is a type of edible berry grown on the tree Myrica esculent. Found mainly in the Kumaon and Garhwal region, this fruit is tiny and dark red or blackish. The fruit’s maturity is confirmed when its color changes from green to dark or blackish red. kafal are found in the hilly region as it requires cold weather to grow, unlike most of the fruits.

Kafal is a very much loved fruit of Uttarakhand, which also has an ancient story related to it. According to the people of Uttarakhand once, there was a woman who brought a basketful of kafal from the forest and ask her daughter not to eat any of them and keep a watch over the basket full of kafal until she would be back after fetching some water from the nearby spring. On the return of the women from the spring, the kafal looked fewer. She immediately slapped her daughter for not following her instructions. The woman did not realize that the kafal looked fewer as they shrunk due to the scrounging heat. As soon as the woman slapped her beautiful daughter, she died and turned into a cuckoo. Ever since, every year in May and the beginning of June, the cuckoo sings “kafal pako min nee chakho” which means Kafal has ripened, but I have not tasted it yet.

Kafal is such an important part of the culture and biodiversity of Uttarakhand that it is also included in some of the popular songs of Kumaon, the lyrics of the song goes like - “Bedu pako baarah maasa, Narayani kafal pako chait” (bedu ripens every month, but kafal only in April-May)”. This is also a representative song of the Garhwal Rifles and the Kumaon Regiment. Kumaon region is mainly known for this fruit. Ranikhet, Almora, and Nainital districts are well known for kafal. In the local kumaoni language, this fruit is called ‘kaafo‘. Tourists are found to be in love with this fruit, people buy this fruit in large quantities which is even economically beneficial for the state and its people.

In addition to being sweet, Kafal is full of a variety of health benefits.

The benefits brought in by kafal are: