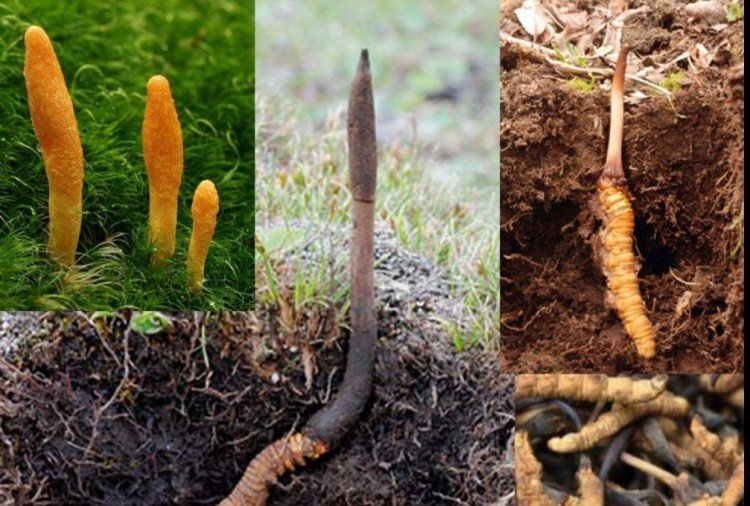 Keeda Jadi in Uttarakhand- Prices in Market and Health Benefits

Caterpillar fungus or commonly known as keeda Jadi or Himalayan Viagra in Uttarakhand is a kind of fungus that grows on insects. Ophiocordyceps Sinensis is the scientific name given to Keeda Jadi, and it is found mainly in the alpine meadows of the Himalayas, at a height of 3,500 to 5,000 meters above sea level. The keeda Jadi is a fungus that germinates in the living larva, kills and mummifies it, and then a dark brown stalk-like fruiting body which is a few centimeters long emerges from the corpse and stands upright. The keeda Jadi is also considered a kind of mushroom as Caterpillars take 5 years to grow underground in Alpine grass and shrublands before finally pupating (from larva) and are attacked by the fungus while feeding on roots. It finally takes the shape of a 5-15 centimeter columnar mushroom out of the forehead of the caterpillar. Other Asian countries such as Nepal and Bhutan also have Keeeda Jadi. While the government of Bhutan had legalized keeda Jadi for sale, the government of India has not yet done so.

The keeda Jadi is of high value in the international market. The Global market rate for 1 kilogram of Keeda Jadi goes from 16 lakhs to 18 lakh, that is 3500 to 4500 per piece. Locals of the hilly region, especially in Kumaon, participate extensively in the collection and sale of Keeda Jadi due to its high demand in the market. People of the hills believe that collecting and selling this unique mushroom has helped them achieve economic stability. The collection of these mushrooms is valued at 5 lakhs per kilogram. This rare kind of fungus is collected when the snow in the alpine pasture starts melting.

Its natural properties to aid many types of ailments have made keeda Jadi highly sought after in the global market. This herb contains antioxidants and has a strong anti-inflammatory effect. Scientific research has proven that keeda Jadi is an effective treatment for cancer and male impotence. It has great medicinal properties, which is why it has been used extensively in China for centuries. Also useful for treating fatigue, Keeda Jadi is a natural booster.

Researchers also claim that keeda Jadi is highly beneficial for coping with depression, slowing the aging process, and preventing asthma in humans.

This medicinal fungus is helpful and reduces the weight of a diabetic patient. Research also suggests that keeda Jadi is effective in controlling cholesterol.

Keeda Jadi is great for treating hypertension. It improves blood circulation by relaxing the blood vessels, leading to lowering off blood pressure.

Keeda Jadi is said to be effective in preventing certain kinds of cancer.

There is no doubt that the listed benefits are the main reason for the increased demand for keeda Jadi. The keeda Jadi plant is a gift from nature that highly benefits the human race, but unfortunately, the change in the environment and imbalance in the ecology is causing the cultivation to diminish. Locals who used to benefit from the sale of this mushroom are now struggling to generate the same level of income they used to get.